A recent find on the ‘Bay was this beautful deadstock Sero OCBD in classic blue with a really nice ‘made for’ label showing the seller as The Fairfield Store. The collars on these vintage Seros are very subtlely curved to a point allowing a classic roll and I particularly like the oversewn pocket chevron which is a double thickness of cloth not just the usual stitching. I’m guessing from similar vintage Seros I own that it’s sometime in the 80s, although of course a 1960s model that would have been sold to traditional customers who were not swayed by the whims of fashion. Cut on a slimmer block than the Brooks Brothers of the era, this shirt is nevertheless a classic fit and not too tapered.  No use of The Purist on the tag here either. The price makes think it should have been an 80s product – one reason why nobody buys USA made goods anymore is the inflation adjusted cost in today’s coin. This would be a very expensive shirt! 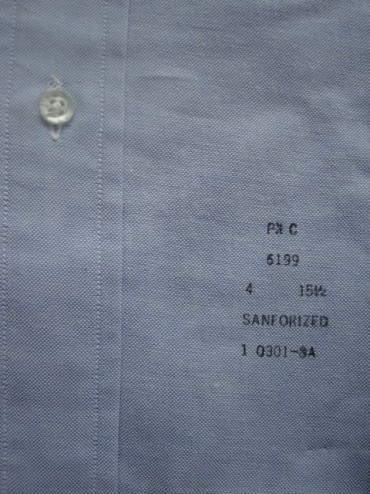 (Special Thanks to Peter K for shipping it from the USA!)

The Fairfield Store Bows Out at 75

FAIRFIELD, Conn., April 19 — Finally the bargain hunters have found the Fairfield Store. It took the lurid orange “Going Out of Business Sale” signs in the windows fronting the Post Road here, because for 75 years the Manasevit family relied on traditional values to attract customers: high quality and personal service. When shoppers wanted less, the Manasevits decided this year that it was time to go.
“Passing Fads Have Their Place,” the Fairfield Store had advertised. “But Not Here.”
In one way, this passing of yet another family-owned clothing store, leaving yet another hole in the main street of one more downtown, is a success story.

No one walking into the small department store today will be impressed; three weeks of sales have already cleared the best goods, and with each day the tone on the main floor ratchets down another notch toward that of the discount chains on the edge of town.
Yet after 75 years in business, the Manasevits picked their time. It did not have to be this year. The store’s finances were still strong. But with the future filling with national chains and catalogue stores and outlets and discount houses, their way of doing business was over and so they chose to move on.

“We considered ourselves a large specialty store with merchandise that was chosen with Connecticut in mind,” said 72-year-old Stanley Manasevit, the son of one of the store’s two founders.

His son, Bruce, who received his M.B.A. from Columbia and worked at Abraham & Straus before coming home, said: “We truly have credibility. When we run a sale, it’s true. When we sell something, we back it up. If people have a complaint, they can come right to us.”

Another advertisement for the Fairfield Store: “To Fit Into the Fabric of Connecticut Life Requires a Certain Quality.”

Small independent department stores like the Fairfield Store have been closing one by one for decades. It had full lines of men’s, women’s and children’s apparel and a large cosmetics department. Its men’s racks were hung with Hickey Freeman, Southwick and Polo suits; the shoes were Johnston & Murphy and Cole-Haan. The women’s department, its largest, was stocked with Anne Klein, Liz Claiborne, Christian Dior and Carol Little.

Nothing about the stock was unique. “There are too many stores, all selling the same stuff,” Bruce Manasevit said. And when the recession of the early 90’s began to lift, shoppers’ attitudes had changed. Clothes were no longer a priority. People were saving for retirement or spending money on college tuition.

“It seemed like everybody was looking for a bargain lately,” said Maura O’Keefe, a sales clerk for 24 years. “Not our old customers — they liked our personal service, our gift-wrapping. Customers almost became your friends. They’d tell you their troubles, and you could tell them yours.”

But down the Post Road to the east were the discounters T. J. Maxx and Marshall’s. Across the road was The Gap. To the west, Main Street in Westport had become an outdoor mall with J. Crew and Barney’s and Brooks Brothers.

“The Fairfield Store,” stated another ad. “An Alternative to Stores That Treat Connecticut Like Manhattan With Trees.”

Phyllis McCoy, a Westport resident who discovered the store in 1957, paused from looking at the racks to say: “It’s a tremendous loss to the community. Its merchandise is always in good taste. It’s a shame to see any store that’s been successful not make it in the discount era. It’s going the way of the old supermarkets with their personal service.”

These days a taste for personal service is expensive. The few surviving prep shops that have fitted Fairfield County with untold numbers of navy blue blazers have gone where the Fairfield Store chose not to, very, very upscale and, well, European.

Along the endless commercial strip that the Post Road has become in Westport, the prep shop founded in 1958 as Ed Mitchell’s has grown up to be Mitchell’s of Westport, where Hickey Freeman, Southwick and Oxxford have one side of the aisle and Armani, Zegna, Hugo Boss and Brioni have the other.

Ed Mitchell’s sons, Jack and Bill, like to think they are catering to their neighbors just as their father did, but those neighbors now are top executives at General Electric and Dun & Bradstreet and the scores of other corporations that have transformed Fairfield County. They travel the world and dress for it.

The Mitchells make sure they can advise them on what looks right in Frankfurt — and on what looks good at G.E. on Casual Fridays. Perhaps a Canali sport coat with a turtleneck?

“Our feeling, very strongly, is that serious business still will be done in suits,” Jack Mitchell said. “But the whole environment in Connecticut does lend itself to a more casual style.”

Navy blue blazers are still the biggest seller at Mitchell’s, but where European suits made up a fifth of its business 20 years ago, now they are half. While the Fairfield Store advertised tradition, Mitchell’s was featured in I.B.M. ads about growing businesses. And yet the brothers and their sales force still go down to local train stations at 5:30 A.M. a few weeks each year to hand free coffee and glossy brochures to commuters.

Jack Mitchell has three sons in the family business. Last year, the brothers acquired Richard’s, the men’s shop in Greenwich, which shares its clientele and style. Another generation seems assured.

But the Fairfield Store was comfortable with a different style, and so its three owners — Stanley, Bruce, and a cousin, Deren Manasevit — are trying to feel comfortable about going out strong.