It’s generally agreed that the end of the line for Brooks Brothers began when Marks & Spencer took over the company in 1988. (Brooks was charged with being an arrogant and remote institution but that is matched only by M&S whose arrogance and business practices led in part to the decline of the British manufacturing of staple clothing items – a story for another day). Since then, there has been the steady deterioration and loss of their own stylistic confidence to the point where Brooks is no more than a ghost of its former glory. Whilst other brands feign a ‘heritage’ that was never really that important – they just managed to survive mostly by luck – Brooks can claim a heritage and influence that rivals Savile Row or Milan on twentieth century menswear. A history not to be sniffed at, and certainly not to be squandered by the current crop of owners who are only one step up from M&S in their misunderstanding of this once great institution.

For those not lucky enough to be able to regularly visit 346 Madison Avenue, Brooks Brothers had the printed catalog(ue). A seasonal sample of the best or latest lines of traditional clothing and accoutrements which enabled those in far flung Macon Georgia or even North London, England to buy into the classic American tradition. For the price of a transatlantic phone call (by today’s standards, probably about twenty five dollars) or a humble reply coupon, Brooks would agree to send their catalogues to anyone, anywhere.

Browsing the print catalogues in the mid to late 80s I would make lists of all the items I would buy – if only I had the money. Usually two or three friends and I would pool together to make purchases from Brooks or LL Bean to justify the expense of air freight in those days. Then we’d call up and go through the items with the telephone sales staff, always friendly and courteous and often amazed that we were calling from ‘London, England’. Customs too, added a heavy tariff but for a brief time at least, the dollar was 2:1 to the pound, and for us creative types with no fixed income in our early twenties, we felt a little rich when working out the prices of these rara avis iviana.

The quality of the items from both Brooks and Bean in those days was truly outstanding. The equivalent quality in England held little interest for us (outside of woollens from W Bill or Westaway & Westaway, or of course pre-imported American goods from John Simons). Not only was the traditional British look (that is the real look, not the Americanised ivy version) associated with old fogeys and all of local connotations of that fusty scene, but the clothes on sale at Brooks and Bean represented a contemporary escape back into what we thought then were vintage movies, old National Geographic copies and jazz album covers (and by no means only the stereotypical Blue Note covers). Even in the 80s Brooks catalogues often had illustrations of the items rather than photographs which were often reserved simply to show fabric details rather than the whole garment.

Looking back, it strikes me as odd how, in 1983 for instance, 1963 – a time of style in movies and music that we pored over and longed to replicate – was in fact only twenty years prior. That’s equivalent of today’s 1993, ironically in which year I remember wearing Filson, Bean duck boots, chambray work shirts, flap ear hunting caps and US made 501s – all the stuff of modern beardy workwear dreams that in 1993 must have simply looked odd to contemporaries in their Madchester baggy styles.

I’ve always watched American movies of any era for the clothing. From spotting an early knife pleated Brooks button down in an early 1930s movie to Clark W Griswold’s chinos and Lacoste combination from National Lampoon’s Vacation – the inherent traditionalism in American clothing, in a society that constantly promoted change in everything else, always intrigued me.

Anyway the reason for this musing is that I recently stumbled across a haul of deadstock items from Brooks Brothers, all with tags and all seemingly from a long remembered past catalogue. Now, I no longer have those original print catalogues, but thanks to the work of the awesome Heavy Tweed Jacket scanning some of his originals I was able to research back and find that, just as I thought, all of these items were featured in the Fall/Winter or Christmas catalogues for 1980.

So here are some of the items – I bought a couple of them, thought about some others, but really I’ve stopped buying stuff that I know isn’t going to fit me properly, just because it’s an amazing deadstock find. I’ve no idea where the seller found them or whether there are more treasures lurking in the same place. I suspect not.

These lovely cords were a size too big for me so were picked up by Fred in LA. The WPL number says they were made by Salant Corporation, a US maker with big contracts making for the US military back then – I have some 1969 dated surplus chinos made by the same factory. That wonderful golden syrup colour cord that was once such a staple is hard to find these days. Most similar modern colours are somewhat off. The trench coat seemed to start taking over from the single fly fronted balmacaan raincoat in the early 60s – witness Steve McQueen in Love With the Proper Stranger – but really took hold in the 1970s and 80s. Never was an American tourist spotted in London without his (or her) full-on all-singing-all-dancing Burberry trench – with the zip out liner and the woollen collar cover, something by the way, that I never saw an Englishman wearing at the time. These Americans probably believed they looked British in this style and were blending in with the locals, much in the way that people in the 80s wearing Italian designer labels believed they dressed like real Italians, who were busy wearing English and American classics. (In the late 80s I met Ermingildo Zegna in Bond St the week he opened his store there. He was dressed head to toe in English tweed, Harvie & Hudson shirts and Trickers brogues. When I asked him about this he laughed and said ‘we Italians make fashion to sell, but we don’t wear it’. He meant Italians of a certain breeding of course, but a trip down the Via Montenapoleone these days will show these same Italians have descended to wearing Russian mafia style D&G). Anyway, enough digressing. This model, the Alexander was probably made in the US and possibly by London Fog who offered a similar model with contrast coloured buttons and a sharper lapel cut than the Burberry standard.

Someone got a bargain here.

Next up, a pair of classic flat fronted corduroys with a twist.

Every season Brooks used to introduce some kind of ‘fun’ product (fun being their term, not mine). For Christmas 1980 it was the colour block corduroys. I nearly bought these just for the cut so that I could get them copied in regular colours but I ended up passing on them. They are either hideous or almost wearable depending on your point of view (or highly desirable for certain preppy bloggers) but I thought about how I’d keep a straight face on the underground when faced with local urchins taking the piss and declined. This time the urchins would be right. You can tell from the photographs, however, that the making is superb. Incidentally, this kind of quality is still available from the some of the trousers made by Hertling in Brooklyn and sold by J Press and John Simons currently.

Now we have something I confess to buying back in the 80s to wear when driving my 1973 Peugeot 304S with the top down and a tape deck playing Jimmy Giuffre – imagining I was in a small town in Maine and not Crouch End – a pigskin suede driving cap or Touring Cap as the contemporary LL Bean catalogue called it.

This was the kind of item that often said ‘Imported’ next to the description and would have come from Spain, Portugal or Italy perhaps.  I missed out when Brooks had theirs in the catalogue (other items got in the way) but did end up buying one from LL Bean around 1990 that was a bit too vapid a colour to make proper use of. This deadstock Brooks one I bought. I buy caps and hats every time I ever travel anywhere, I have a big collection of them, but for some reason, like holiday romances, they never survive coming home. Hopefully, I will get some open top motoring use out of this.

Here we have some vintage Brooksgate flannels.

Cut for the younger customer and, because of the decade, fairly slim but straight. These were too short for me otherwise I would have bought them.

A classic that has seen a resurgence due to the proliferation of the reprint of Take Ivy is the reversible boating jacket/slicker – again a Brooksgate item, for pairing with chinos and either Sperry Topsiders or CVOs, with an OCBD and Shetland sweater underneath, and featured in the Christmas 1980 catalogue. I thought about it, but vintage vinyl doesn’t age well, and there was no way of knowing how this stuff had been stored. Lovely item though, and someone got a piece of east coast style history. I particularly like the tag that says ‘I’m Reversible’. It was Made in China, too so an early example of asian outsourcing for Brooks.

Not a Brooks item per se, but of a common vintage and quality is this deadstock Alan Paine of Godalming shetland in ‘Grapefruit’ yellow. Now, Americans not familiar with British geography could be forgiven for imagining that Alan Paine hails from some far-flung windswept isle where the crofters wear peat jackets and cook haggis in single malt whiskey, but the reality is more prosaic: Godalming in the Home Counties. Still Alan Paine was a major force in British woollens exports in the 20th century and regularly advertised in the American media. In the last couple of years it has finally become much easier to find decent Shetland sweaters again – that is the traditional saddle shoulder crew neck version. However, outside of O’Connells (I really can’t pay £100 plus shipping to send one back across the Atlantic) and certain Japanese web stores on Rakuten who never seem have stock, finding a Shetland in this kind of vivid ivy colour is damned hard. Heathers are great and have their place, and as I’m writing this I’m wearing a deep burgundy solid, but sometimes you want a Shetland sweater to lift the ensemble, say under a navy or olive cord jacket, or navy G9. So I jumped at this one. At £35 I think I got a bargain.

These items may represent the fringes of the clothing in those catalogs that you or I would jump at if we could buy them today, but together they form a part of a history that is now sadly past. For me it isn’t a personal form of nostalgia for days when it was all fantastic – it was already virtually impossible to buy anything but crap in England in 80s as designer mania took hold – even then my friends and I had but a handful of places to buy clothes from and no internet to source with, but it is still sad to see pass.

Thanks go to Heavy Tweed Jacket for scanning these images from Brooks’ catalogues. Check out his excellent blog here

UPDATE: Reader Gary Warnett has posted some further images of the BB ‘fun’ pants collections from past catalogues over on his blog 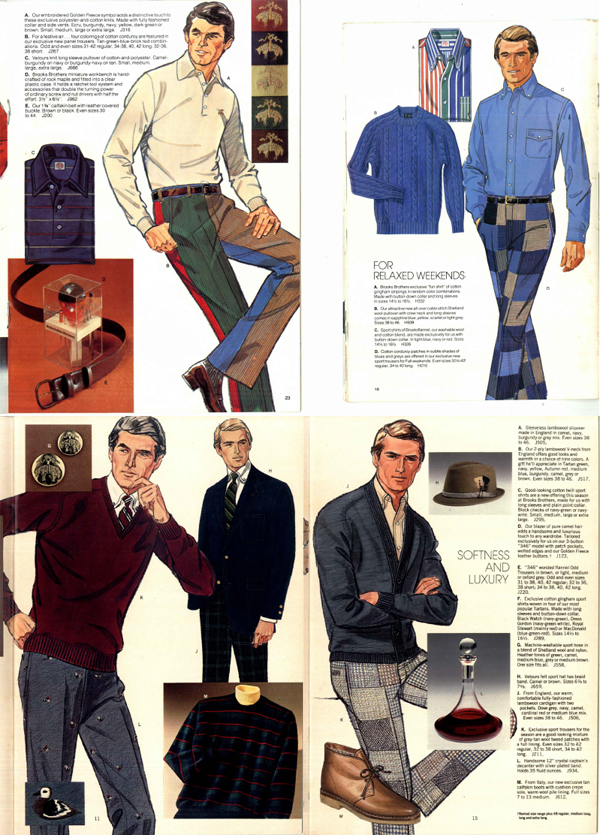